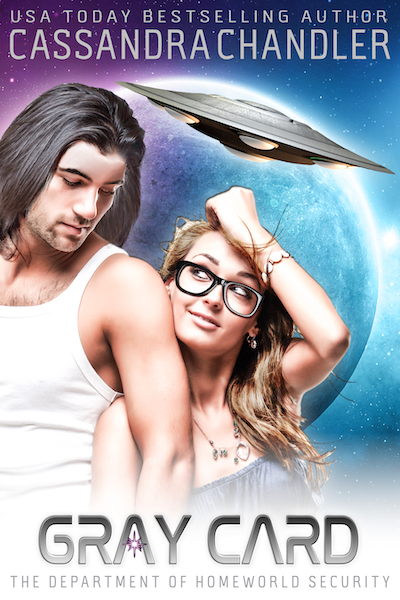 Her gorgeous best friend is an alien general who has to leave Earth in 3 days—unless she can convince him to marry her!

“…this story waltzes through danger, risk and sacrifices we make for love.” — 5-star Amazon review

Is he after her heart or her planet?

Evelyn Chambers is a nerdgirl and proud of it. When she finds out that her drop-dead gorgeous best friend is an alien general with only three days left on Earth, she has to wrap her head around too much at once. Aliens are real, and if she wants to keep hanging out with one, she’ll have to marry him!

Adam Smith has never seen a planet as beautiful as Earth or a woman as enticing as Evelyn. His government wants him to re-enlist, but when Evelyn suggests marriage to help him stay, Adam realizes that what he really wants is her—and he’ll sacrifice everything to be with her.

Can he convince his government—and Evelyn—that he’s looking for more than a Gray card?

“We should get married,” Evelyn said.
“What?”
“We should get married.”
“That’s not something to joke about.”
“I’m not joking.” She turned to face him, eyes bright and wide. She sat up straighter and leaned toward him with a broad grin on her face. “If we get married, you can stay here as long as you want.”
He had a vague understanding of the various laws on her planet about people from different countries marrying, but she couldn’t possibly fathom what she would be getting herself into. “I appreciate the offer, but—”
“You’re not interested. I get it. My mistake.”
She sat back—eyes shuttering, smile gone—and started to turn away. Adam couldn’t stop himself from reaching out and gently caressing her cheek, bringing her gaze back to him. The thought of marrying her, of living with her on Earth for the rest of his days… It was tempting.
There were cases where citizens of the Coalition had been assimilated into another culture, but they were extremely rare. Aside from the intense amount of bureaucracy he’s would have to navigate, it would mean giving up all of his resources, his rank, even his citizenship.
With his military background, the High Council would probably insist on implanting him with a tracker and a device that would fry anything more sophisticated than a standard computer if he came too close. The Coalition didn’t want anyone getting homesick for their technology—or doing worse.
A planet with Earth’s technology level could easily be exploited. Adam could pass off rudimentary Coalition tech as his own and make a fortune, then use his knowledge to turn that into political power.
No one would believe he was staying on Earth for love, even if that was what Evelyn was offering.
“We can’t get married just to fool them into letting me stay,” he said.
“Who said it would just be for them?” She tilted up her chin, gaze boring into him. “I have been crazy about you pretty much since we met. I will pass any test they throw at me about why I’m marrying you.”
“Evelyn…”
He didn’t know what to say. Did she mean she loved him? He hadn’t dared to hope, to even consider that possibility. Maybe attraction, perhaps lust, certainly friendship, but love? The way his heart was beating, it was difficult to convince himself that he didn’t love her too.
If he stayed, he would have to give up everything…
“Marry me,” she said, her voice dropping almost to a whisper.
Adam leaned toward her, not pausing until their lips touched.