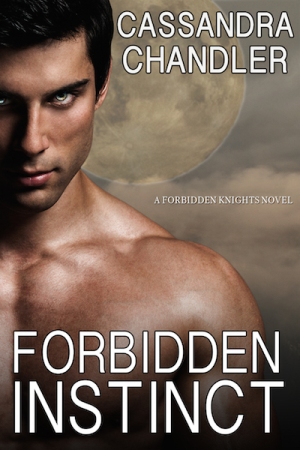 She’ll sacrifice anything to save the world—even love.

Miranda Lennox knows to trust her instincts no matter what. Her gut feelings aren’t just intuition—she can see the future. Her visions have driven her to keep everyone at a distance, even Darren, the gorgeous, raven-haired guy who shows up every night at the restaurant where she works. Then a vision drives her to risk her own life, throwing the two of them together.

Darren Calverton was waiting for the right moment to make a move on the sweet waitress who captured his heart the first time they spoke. He had no idea that move would be to pull her out of the wreckage of her car, or that it would happen right before he’d be fired from a private security firm when an important package is stolen.

Tracking down the thief leads him into a head-on encounter with a werewolf that leaves Darren questioning his perception of reality—and saddled with a very real curse. Only Miranda’s touch can ease the rage building within him as the full moon approaches.

Dodging a homicidal elf, an ex-fairy fighter who isn’t as retired as he seems, and a Fairy Lord bent on destroying the world isn’t the best way to start a relationship, but they have to rely on each other if they—or anyone else—are going to survive.

Available on these distributors and more!

When they’d met up earlier, Darren had been able to use Scott’s account to check on the tracking records for the company’s cars. The one trip that struck him as odd was one of the “meet-and-greet” vehicles being driven through the Old River district two days ago.

The car was used for the lowest risk activities the company was involved in. It didn’t have bullet-proof windows or reinforced doors. The thing was probably more fiberglass than metal. Given the state of the neighborhood, it seemed an odd choice.

Even stranger, no driver, passenger, or contract had been logged. From the GPS records, the car had pulled over to a curb and stopped briefly, then cruised around for an hour before stopping for a moment again, and heading back to company headquarters. Darren had memorized the route and was tracing it to see if he could figure out exactly where the person had been and what they had done.

His hands clenched on the steering wheel as he scanned the buildings for… He didn’t even know what he was looking for.

He had already driven the entire route twice. All he had seen were abandoned buildings, empty lots, and a small park. There weren’t even any vagrants around. Not so much as a stray cat.

Which…was weird. There should have been movement. Some signs of life, even in the middle of the night. A possum. A raccoon. A stray d—

Something huge ran in front of his car. Darren swore and turned the wheel, slamming on his brakes. Whatever it was, it was moving too fast to avoid.

His car lurched as they collided, metal crashing into flesh with a sickening wet thunk. His entire windshield was covered in fur for a moment as the thing rolled up his hood and over the roof of his car. Darren looked in the rearview mirror as it tumbled down to the street behind him.

He pulled his car to the curb and jumped out, running back to see what he had hit. Instinct and habit made him draw his gun. He held it pointed at the ground as he approached where the animal should have been. All he found was a pool of blood. A large pool of blood. Paw prints led away from it toward the nearest abandoned building.

Darren’s arms dropped to his sides. He couldn’t keep himself from saying, “Seriously?”

He walked back to his car and grabbed his keys from the ignition, then slammed the door shut and armed the alarm. He stood there for a moment, wondering if he was really doing this. Following an unknown animal that would probably bite him as soon as look at him, on the off chance that he could help it.

Yeah, he was doing this. He had hurt it, and he would help it if he could. He pulled out his flashlight and held it above his weapon, just in case.

The trail of red led up some steps and into what had once been a grocery store. The front windows were boarded up, but the door had been knocked off its hinges. Fresh red was smeared on the doorknob.

Darren had seen videos of animals who’d been trained to open doors. But they’d had homes with people. Opportunities to observe and practice. Which meant he had probably just hit someone’s pet.

He imagined a little kid crying because their dog had run off. Wondering if it was okay.

He was going to find Fido and drag it to the nearest animal hospital. As soon as he figured out where that was. He just hoped he didn’t have to shoot it to get it to go along with him.

Soft whimpering and intermittent grunts greeted his ears as Darren stepped inside. He glanced down and saw a line of red blotches on the dusty floor. Large paw prints staggered alongside the blood trail. Their shape was a little strange, but then the dog was hurt and probably having trouble walking.

The whimpering turned to a low growl. Not surprising.

He assessed his surroundings quickly. There were too many ambush points for his liking. Wooden shelves still filled some of the relatively small place, blocking his line-of-sight. Some had been smashed, boards strewn about the floor. The blood trail led around the last few free-standing rows.

Adrenaline flooded his system, sharpening his senses and making his skin feel electrified. He took a few deep breaths to even himself out.

No matter how much Mrs. Ford tried to deny it, he and Scott had been in dangerous situations before. They had learned to pay attention to even the tiniest details in their surroundings, to listen to their instincts and trust that they knew when danger was near. Darren had faced down guns, kidnappers, and even a maniac with a bomb strapped to his chest.

He had never felt this much danger. The air was thick with it.

Keeping his voice as calm as he could, he said, “I’m not here to hurt you. I’d like to help if I can.”

The growling stopped. The space became utterly quiet except for the sound of Darren’s breathing. He took another step closer, grit and dirt crunching beneath his feet.

Hell burst out from around the corner.

A six-foot tidal wave of fur and claws and teeth launched itself at him. Darren had been aiming at the floor, watching for something near the ground, but this thing… Its face was on the same level as his. It swatted Darren’s gun away before he could get off a shot. Swatted the gun with its hand.

The creature was on him almost too fast to track. Darren’s arms shot up to protect him from the attack, bearing the brunt of it. Pain lanced up his forearm as the thing bit him, hitting Darren with its full weight and taking him to the ground.

The hard tile floor smacked the back of his head hard enough to make lights flicker across his eyes. He forced himself not to panic—to block out the pain and look around for anything that might help.

The flickering light he was seeing turned out to be from his flashlight, spinning crazily on the floor after he dropped it. No help there. A board from the broken shelving was nearby, but not close enough. Darren still reached out with his free hand—the one not being chewed on by the furry monster—clawing at the floor as he tried to grab it.

His flashlight slowly stopped its spin, the beam at just the right angle for him to get a better look at what was latched onto his arm. His brain logged details that didn’t make sense. Panic must be clouding his senses.

It was hairy, huge, and had a long muzzle—like a wolf. But from the quick glimpse Darren had caught before the thing took him down, it was bipedal. It glared at Darren with bright green irises surrounded by white sclera.

A dog with human eyes.