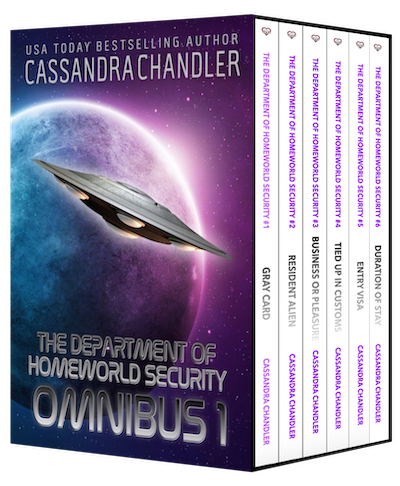 The Department of Homeworld Security Omnibus 1

When members of the repressive society based on Sadr-4 have up-close and personal encounters with Earthlings, the results will rock their worlds.

Enjoy the first six novellas in The Department of Homeworld Security series all in one omnibus. Short, steamy, scifi, filled with optimism and quirky humor—these books are the perfect escape.

Gray Card: A nerdgirl discovers her best friend is an alien general who has to leave Earth in three days—unless she marries him!

Resident Alien: A brilliant billionaire discovers the mysterious woman he’s been talking to over a top-secret communications relay is actually an alien who needs his help.

Business or Pleasure: An alien soldier is sent to bring an environmental scientist to safety—but she won’t leave the planet until she’s tracked down the hostile aliens threatening Earth’s ecosystems.
Tied up in Customs: A secret agent gets in way over his head when he’s abducted by an alien super-soldier eager to explore everything Earth has to offer—including his body.

Entry Visa: A biology teacher searching for Bigfoot finds him, along with the woman he fell for on Christmas Eve—an alien soldier sent to arrest the cryptid for trespassing on Earth.

Duration of Stay: The shapeshifting “Gray” who’s been hunting them all finds himself suddenly more human than Scorpiian, and starts to like it— with the help of a very friendly Earthling.

“T5-Alpha, I need an ID on the vessel currently approaching the station.”
After a brief delay, the station’s interface sounded through the communications output of her control-band, level and emotionless.
“No vessels are on approach.”
“What?” Kira looked back out the viewport that followed the curve of the small, disc-shaped station. The ship would reach them in minutes. It wasn’t even cloaked.
Wait, the station was cloaked. How did they even know where she was?
For a moment, she considered that it was a coincidence. An unknown ship was departing from Earth and just happened to be on a direct collision course for the invisible station.
Unlikely.
“I have visual contact. Scan again.”
The delay was a bit longer, but the interface came back with, “No vessels detected.”
Something had to be wrong with the scanners, but she didn’t have time to run a full diagnostic check. If the station wasn’t detecting a threat, it wouldn’t defend itself—or her. Not without her help.
The approaching ship was close enough that she could make out its shape—a small equilateral triangle getting bigger by the moment. Adrenaline spiked through her system.
“It’s the Tau Ceti!” Kira jumped to her feet and ran toward command, hunching over to stay clear of the low ceilings while shouting orders to the interface. “Raise shields. Send a distress call to the Arbiter.”
“Shields inactive. Communications are offline.” The station made the statements casually, as if it wasn’t reciting their death sentences.
“By whose order?”
“Access code 471-PLT-113894—planetary liaison. Earth designation Todd Simms.”
Kira’s fingers were slick with perspiration as she climbed the ladder that led to the upper deck. Coincidence was no longer a possibility.
The Arbiter’s communications with the Coalition had been logged with the station while it was in orbit. She knew that the planetary liaison had been taken into custody. What she didn’t know was why his codes hadn’t been stripped or who was using them.
The command deck was the most open and spacious part of the station, with a lowered circular area surrounded by monitors facing its center. One person standing in the middle of the circle could see everything, commanding the station as necessary. Kira ran to the center of the space. A chill swept through her as she looked around.
One by one, the monitors flickered out. The station lights dimmed and she heard systems shutting down all around her.
She was too late.