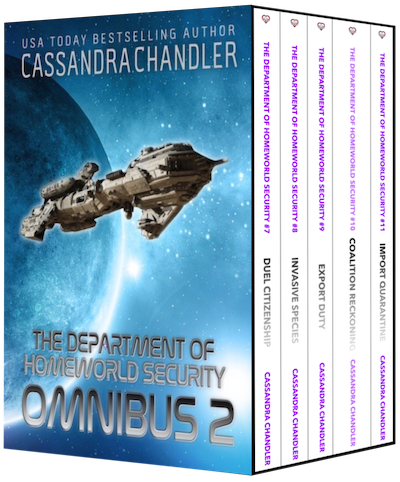 The Department of Homeworld Security Omnibus 2

When members of the repressive society based on Sadr-4 have up-close and personal encounters with Earthlings, the results will rock their worlds.

The adventures continue in this omnibus of books 7 – 11 in The Department of Homeworld Security series. Short, steamy, scifi, filled with optimism and quirky humor—these books are the perfect escape.

Duel Citizenship: A health-conscious restaurateur bites off more than she can chew when she accidentally invites a powerful group of aliens to visit Earth.

Invasive Species: A pair of science fiction fans navigate a first date—and discover that one of them is actually an alien hybrid.

Export Duty: The manager of an import/export company gets a chance to take her company intragalactic—and stave off a deadly plague on another world.

Coalition Reckoning: A chef discovers she’s cooking for a group of humans and aliens just before they’re abducted by a warship determined to punish them for standing against their repressive government.

Import Quarantine: The commander of the Reckoning learns to navigate his newly restored emotions just in time to fall in love with an Earthling.

Teaser/Excerpt from Invasive Species (remember, these books are intended for mature audiences):

Kyle’s body was on fire. His skin crawled, his mouth itched, his throat was raw. His eyes burned from the light pouring in through the windows of the car and his ears felt plugged from all the sounds surrounding him. Tires on the pavement, displaced air from traffic, the clanging, clamoring sounds of the city.
But he was with Tracey. He couldn’t believe how much that comforted him already in the short time since they’d met.
“You still with me?” she asked, for the dozenth time.
“Yeah.”
He kept his eyes clenched shut and tried not to barf. Barfing on their first date was not okay. It was bad enough he was curled in a ball in the passenger’s seat, trying to make his stupid muscles stop cramping.
“Come on, come on…” She honked her horn again. The sound reverberated through his skull. His brain felt like it was turning to mush.
“Could you not use the horn? It’s too loud.”
“Sorry.”
He felt the car swerve, his stomach lurching with the movement. Someone else honked, the sound equally painful.
“Maybe we should call an ambulance so they can take you to your place,” she said. “Sirens would help cut through this fucking traffic.”
“Such language.” His teeth clacked as he spoke, and he realized he was shivering. “You k-k-kiss your Grandma with that mouth?”
“My Grandma’s the one who taught me to swear. Shit. I’m going to try the side streets. It’s longer, but there’s less traffic.”
He felt the car swerve again, then the sound of rushing wind around him lessened. He let out a sigh at the one-less-stimulus and said, “I think I want a first date do-over.”
“Are you kidding? Emergency aside, this is still the best date I’ve ever had.”
A rush of not-pain flooded through him, dulling the alerts his body was sending to his brain. “Me, too.”
She let out a snort. “Right. Your date with the nerdgirl—”
He didn’t let her finish. “Nerdy girls are the best girls.”
“You are not allowed to die. Because I am so keeping you.”
There was a breathy quality to her voice, as if she’d been trying to whisper the second part of her statement. He heard it loud and clear, though, even over the cacophony on the street.
Another rush of not-pain hit him. Goosebumps tore across his flesh, more intense even than when she’d touched him earlier. His dick hardened, his muscles swelled, his brain felt like it was about to explode.
His ears started buzzing. The only sound that was louder was the pounding of his heart.
Thud-thud. Thud-thud. Thud-thud. Thud-thud-thud. Thud-thud-thud.
Three beats?
Panic surged through him, electrifying his system further. He had to get out of the car, had to get away. What the hell was happening to him?
He reached for the handle of the door and pushed it open. Tires screeched and the car lurched to a stop just as he stumbled out onto the street.
“Kyle, what are you doing?”
He didn’t know. He just needed space. Openness. Air.
He opened his eyes to see a kaleidoscope of color. The sky rippled with moisture patterns he…wasn’t sure how he could sense. He reached his hand up to touch a particularly dense patch, his skin tingling as the moisture clung to it.
As he watched, his skin turned from a weird ashen-gray to a deep olive green with darker mottled patches here and there. He extended his fingers. Slight translucent webbing spread between them.