Here’s a Halloween treat for you all to enjoy—a creepy excerpt from the third Summer Park Psychics novel, Lingering Touch.

Finn’s psychic ability to read objects comes in handy while working as a private investigator—until he starts working a case involving the recently deceased serial killer, Michael Angelo. Reading the memories of Michael’s victims opens a conduit between Finn and something far more dangerous than echoes of the past, and only Jazz’s touch can pull him back from the darkness. 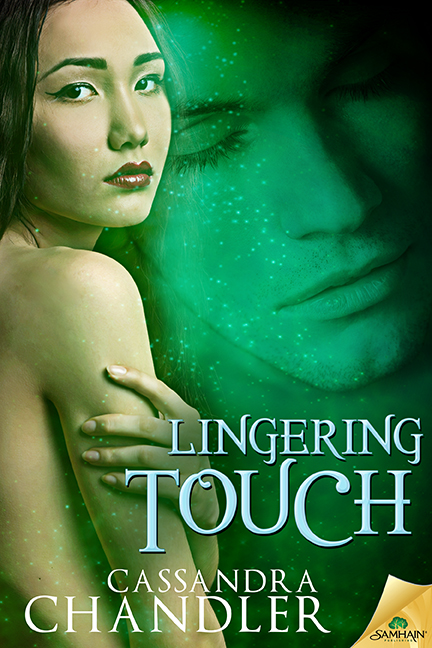 Finn nodded. They backed away from the edge of the fennel. She pulled his arm over her shoulders again and helped him to his feet. They had to get away. Away from Travis and the house where Michael had grown up. Away from his childhood stomping ground.

Even as they ran, Finn felt an oppressive energy, like it was riding on his back, weighing him down. He stumbled more times than he could count, but Jazz was always right there, pulling him up, alternating between whispering encouragement and threats.

Distance wasn’t helping. They finally reached the SUV. She popped open the back hatch and helped him sit. When that was too much for him, he lay down on the tarp that covered the big space.

“Finn, what the hell is going on with you?”

“I don’t know.” He covered his eyes with his hands.

He felt her crawl up next to him.

She grabbed his arm and started tugging on it. When she couldn’t get enough leverage to budge him, she straddled his stomach, gripping his hands tightly and pulling. He let her win, but kept his eyes closed. He didn’t want to know what she’d see. He was too afraid.

“Please Finn. Let me see your eyes.” She put her hands on his cheeks, her touch gentle. “Please.”

Shut up shut up shut up! Finn’s stomach started churning again. The thoughts popping into his head weren’t memories. They were new.

A horrifying theory presented itself.

He had been focused on avoiding getting lost in memories while he was reading things. As long as he made it out, he figured he was fine. But what if he was wrong? What if he was picking up Michael’s energy with each reading and it was somehow staying? What if Finn couldn’t get rid of it?

He felt like Michael’s memories had become ingrained in Finn’s mind. Worse—like part of Michael’s personality was stuck in him.

Finn felt a darkness within him laugh. Whatever it was, it wasn’t even bothering with trying to hide. Not anymore.

He was scared too. He couldn’t move. The darkness was creeping along his limbs, paralyzing him. He was trapped in his own body.

“Please, I can’t lose you again,” she said. “Do you understand? Can you even hear me?” Jazz’s hands were trembling. Her grip tightened. Then she kissed him.

The darkness evaporated. Finn felt it retreat. He wasn’t sure what it was or where it had gone, but for the moment, he was just himself again. It was only him and Jazz.