I’m so excited to host my friend JC Hay here in Cassland. Please give him a warm welcome and enjoy this guest post he wrote about his Pets in Space® 5 story Mittens Not Included!

The Magic of Cats

If you’ve been following my TriSystems books, you may have noticed a distinct lack of Earth-animals. Oh there are a few analogues, the Umbra Wolves and Goanna especially, but they’re decidedly not Terran in their appearance or behaviors. I’ve been planning to introduce both dogs and cats at some point (including an upcoming tribute to the pugs in David Lynch’s Dune) when I realized that this year’s Pets in Space was the perfect opportunity to introduce cats.

There’s a lot of reasons for this – foremost, Layth is a bit of a control freak and cats are the perfect agents of chaos to throw a wrench into his life. And since both cats and dogs are the realm of the extremely rich (they only made the transit from earth as a few genetic samples, so it’s about recreating and rediscovering breeds), they were the perfect contraband for my favorite band of smugglers to get involved with.

Most of all, though, I wanted to include cats, because a dear friend lost his elder kitty and I wanted them to see a future where cats were still around. I snuck in a tribute to my friend’s cat toward the end of Mittens Not Included as well, because I could.

The hardest part about writing three cats was trying to make them distinct—they’re kittens, and I wanted very much for them not to be interchangeable. But I also only had fifty thousand words to work with, so it can be difficult to paint them with more than broad brushstrokes. Nonetheless, if one’s getting into trouble, it’s probably Austen. And if one’s being cuddly, it’s almost certainly Bennet. Collins follows his own drum, but tends to be up for whatever mischief Austen has started.

Bringing cats into the Three Systems was a fun challenge – unlike my Umbra Wolves, there’s no “magic” empathy linking them to their people. They are cats, and as T.S Elliott might tell us, that’s a special kind of magic all its own. 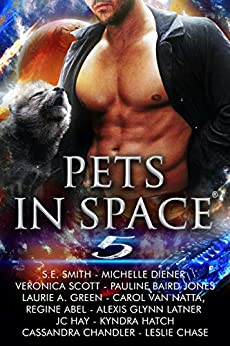 It’s time for an escape! Pets in Space® 5 is back for the fifth amazing year! Escape to new worlds with twelve of today’s top Science Fiction Romance authors. They have written 12 original, never-before-released stories filled with action, adventure, suspense, humor, and romance that will take you out of this world. The giving doesn’t stop there. For the fifth year, Pets in Space® will be donating a portion of the first month proceeds to Hero-Dogs.org, a non-profit charity that supports our veterans and First Responders. If you are ready to forget the world around you and make a difference while you are having fun, grab your copy before it’s gone!