Welcome to Teaser Tuesday! Today’s excerpt is from Gray Card, the first novella in my Department of Homeworld Security series.

When Evelyn proposes to her best friend, there are complications she has no idea about standing between them—including the fact that Adam is an alien! The following excerpt takes place when Adam has gone to his planetary liaison to declare his intentions, and receives a nasty surprise.

(THE DEPARTMENT OF HOMEWORLD SECURITY, Book One)

“I see. You’ve tasted even more of the forbidden fruits of this planet than I thought. The women here do have their charms. I have yet to find one immune to my own.”

Adam couldn’t believe that the planetary liaison had taken such liberties with the people he was supposed to be protecting. Adam kept his expression as impassive as he could, seething inside.

Todd shook his head and walked back to his chair, but didn’t sit. “My advice is to find a few Earth women to teach you their tricks and then hire someone on one of the stations to service your new appetites when you get back.”

Adam had made a dangerous assumption about Todd—and was paying for it. Being assigned to Earth was an important role for a planetary liaison. They were supposed to be carefully screened. They were also supposed to protect the populace of the planet they were overseeing, not offer them up as entertainment.

“I’m only interested in one woman,” Adam said. “And she’s on Earth, so that’s where I’m staying. Draw up whatever forms you need. Citizen revocation, contracts of conduct, relinquishing my assets.”

A spark lit in Todd’s eyes at the last. Adam was hardly surprised. Apparently, Todd had been on Earth long enough to be corrupted by the vast resources of the planet. He masked his expression, most likely realizing that he wasn’t being as discreet as he needed to be.

“You can’t just buy yourself a spot on this planet.” Todd sat again, leaning back and steepling his fingers, elbows on the arms of his chair. “If people could, the place would be overrun. Half the planets with preservation status would be.”

“I’m not some tourist looking for a permanent vacation. I don’t make these choices lightly.”

Todd was silent for a while. The unwholesome gleam in his eyes caused Adam’s stomach to clench.

Now that Adam was listening to his body more, he received the message clearly. Battle was coming.

“You love this Earthling?” Todd asked.

Adam hated to admit it when his senses were warning him of danger, but he had to. 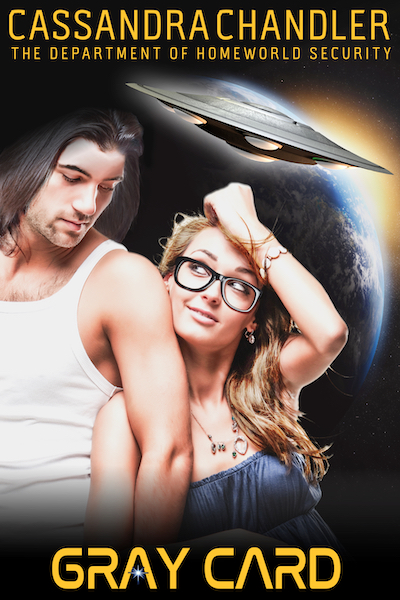 “Well-written, fun, with nary a typo in sight, this story waltzes through danger, risk and sacrifices we make for love.” — 5-star Amazon review

Is he after her heart or her planet?

Evelyn Chambers is a nerdgirl and proud of it. When she finds out that her drop-dead gorgeous best friend is an alien general with only three days left on Earth, she has to wrap her head around too much at once. Aliens are real, and if she wants to keep hanging out with one, she’ll have to marry him!

Adam Smith has never seen a planet as beautiful as Earth or a woman as enticing as Evelyn. His government wants him to re-enlist, but when Evelyn suggests marriage to help him stay, Adam realizes that what he really wants is her—and he’ll sacrifice everything to be with her.

Can he convince his government—and Evelyn—that he’s looking for more than a Gray card?

Author’s Note: Have you ever wanted a quick read with super-hot love scenes, wacky hijinks, and whimsical puns? Presenting The Department of Homeworld Security! Short, sexy, scifi, packed with fish-out-of-water moments, aliens being baffled by finding their first love, and lots of…probing.

Contains a sneak peek at Resident Alien, book two of The Department of Homeworld Security. Get it now!

Available on these retailers: 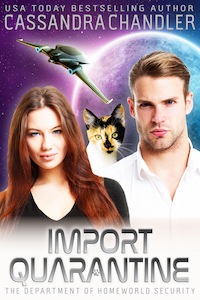